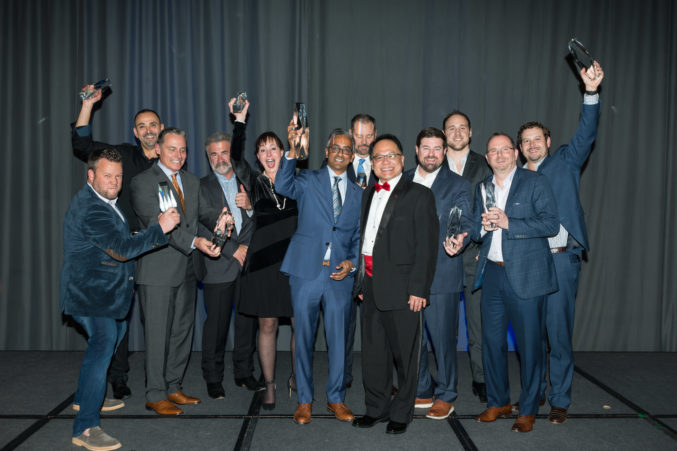 By admin | Business | No Comments

After placing in fourth last year, Ontronics took home first at the SMU Cox Caruth Institute for Entrepreneurship’s 2019 Dallas 100 Awards. The recognition goes to the organization SMU Cox considers the No. 1 entrepreneurial company in the Dallas area.

Farmers Branch-based Ontronics is a “reverse logistics” company that specializes in device monetization by remarketing and repairing mobile devices and accessories. As a “global leader in the secondary mobile device space,” Ontronics processes over 1 million devices annually for clients across the globe.

Founder and CEO Shawn Moeenuddin and his team were announced as winning this year’s top spot among a crowd of around 1,000 at the Omni Hotel on Nov. 21.

The Dallas 100 is the Caruth Institute’s way of annually honoring the fastest-growing, privately held companies in North Texas. SMU said it bases the rankings on percentage growth and absolute dollar growth over the previous three years. Most often, the No. 1 company has placed in the top 10 previously.

The Caruth Institute, which co-founded the list, works with accounting firm BKD LLP’s CPAs and advisors to examine the sales of hundreds of companies. The winners are intended to showcase a broad range of local businesses.

“To rank as the top company this year, Ontronics’ sales increased exponentially in 2018 and more than 300 percent over the last three years. That stunning increase happens to be the average growth of each of the top 10 winners for the last three years,” Simon Mak, the Linda A. and Kenneth R. Morris Endowed Director of the Caruth Institute for Entrepreneurship, said in a statement. “Admittedly, Ontronics is not a household name, yet with that kind of growth, this company is doing its part to contribute to a vibrant Dallas area economy.”

Mak said the Dallas 100 companies both individually and together represent an economic powerhouse. The event is meant to showcase the powerful entrepreneurial spirit that’s thriving in Dallas—this year’s winner generated a combined 3.5 billion in sales in 2018. And, from 2016-2018, they collectively grew at an average annual growth rate of 82 percent.

“For almost three decades now,” Mak said, “it has been our honor at the Caruth Institute of Entrepreneurship to shine the spotlight on the economic contributions of entrepreneurship.”

Here’s what companies ranked in the top 10: